This was a difficult entry to start. I’ve been sitting here staring at this screen for more than an hour, trying to figure out how to put one of the most traumatic aspects of Kim’s death into words. There are no words. But I have to say it in order to begin chronicling the memorial markers, otherwise the reason I’m doing them won’t be clear, and I do need it to be clear. I need the serious significance behind them to be clear. The reason I’m doing them is very simple, really — it’s the months of excruciating pain and torment I’ve gone through emotionally because of it that make it hard to get out.

I was not given any of Kim’s ashes. Because I don’t have any of his ashes, I cannot carry out his wishes for scattering them.

There, I said it. Not so hard, right? Simple words. Short words. Deceptively normal words. Words that don’t make clear how thin a razor blade of sanity I’ve been balancing on all these months. Words that are not remotely adequate to express the depth of anguish behind them. If the written word could express it, if words existed that could express it, they would split your head wide open. But it can’t, and they don’t, and I don’t want your head to split open, so I won’t even try. There’s so much more I could say about it, yes, of course there is, but why? What is, is, and even thinking about it is just so painful. If you cannot change a situation, all you can do is learn to accept it, so I am trying to accept it and move forward as best I can. And now it’s taken me another hour just to get these three paragraphs out, so I’ll leave it at that.

I’ve had to get creative in finding ways to reclaim pieces of Kim that people have tried to take from me. I’ve actually found a lot of comfort and peace in my resourcefulness, and I know that Kim would be proud of me because one of the things he always said he loved most about me was my indomitable spirit. He said he was in awe of  my eternal optimism! I was so touched, but surprised, because I didn’t see myself that way at all. I thought of myself as a pessimist, someone who falls apart when anything goes wrong. He said that though bad things may crush me at first, I always find some way to turn the negatives into positives in the end. That was something I never noticed about myself until he pointed it out, but as soon as I started trying to take a step back to observe myself in a broader way, I saw it was true, and it made me stronger. When looking at ourselves, we can be so harsh. Sometimes the people who love us most are the only mirrors that can reflect us truthfully.

So the memorial markers are for Kim and me, something no one can ever take away. It is the closest I can come to honoring and respecting his wishes.

Yesterday, Thursday, I went over to Truckee around the time Kim’s train would have been arriving, if he were arriving. I went in a few shops, including a hardware store to pick up a spade, stopped for gas ($4.49/gal), and then headed out…

I placed the first memorial marker at the Kyburz Flat Interpretive Site. I wanted to put it at Wheeler Sheep Camp, which is at the furthest northern edge of the vast Kyburz Meadow marshland, but all the roads are dirt (with a little gravel left in some spots, if you’re lucky, but I wasn’t very lucky), and there’s still a ton of snow melting, so I only got a fraction of the way there before the road became nothing but mud. Lots and lots of mud with deep tire tracks collecting water. Kim was often brave enough to charge on, but I am not that brave. This is the main place I was worried about being stranded and eaten by bears because it’s so remote, and I wasn’t keen to get myself stuck. I could have hiked there, but it was late in the afternoon and the mosquitos were out in force. I ended up with a bunch of bites as it was. I got out of the car to take a picture in one spot on the way in and within seconds, there was a solid cloud around me. The air was black and buzzing. I even inhaled a few. I don’t recommend it. And here on the edge of the meadow, along the treeline, the mosquitos are really out for Happy Hour. So no Wheeler Sheep Camp for me. Turning around on the single lane dirt road (and I use the word “road” loosely here) without crashing into the random boulders dotting either side was nerve-wracking. But I managed, going back and forth about three inches at a time.

So I put the marker in a section of Kyburz Meadow, near the wildlife viewing area and bridge that are just down the hill from the remains of More’s Station.

I was there for about an hour and a half, and did not see a single soul the entire time. It was just me and the birds and the trees and the sky and the snow and the marsh. Wilderness as far as the eye can see.

A little over one mile into Kyburz Flat, scouting the meadow for a spot.

Calling your spirit: “Be here with me.” I hear your whisper in the trees. 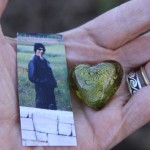 Love in the palm of my hand. 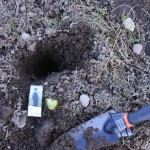 The earth in the marsh is rich and dense and claylike. 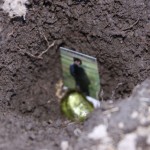 You will be safe here. I love you. 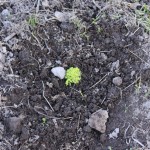 Undisclosed location. The chance that anyone will ever even walk near you is highly unlikely. 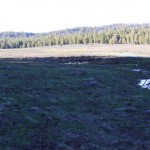 Your spot is in this picture. Only you and I will ever know exactly where. 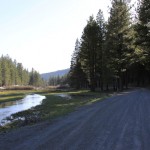 The long road out. I did not have a flat tire and end up being eaten by bears!

This entry was posted in BEARS!, Memorial Marker. Bookmark the permalink.